SPELAB Exhaust Header for 1997, 1998, 1999, 2000, 2001, 2002, 2003, 2004, 2005, 2006, 2007, 2008, 2009, 2010, 2011, 2012, 2013, 2014?Chevy Small Block Chevrolet V8 Ls1/Ls2/Ls3/Ls6 Replacing or upgrading your exhaust header is necessary for both engine performance and sound. Whether on or off the track, exhaust headers provide more horsepower and improved exhaust sound. SPELAB offers many products to help you create your own custom engine headers. It’s really easy and convenient to use: direct bolt-on, no modification needed. Fitment: 1997-2014 Chevy Small Block Chevrolet V8 Ls1/Ls2/Ls3/Ls6 Specifications： Brand Name: SPELABCertificate: ISO9001:2000Application: Automobile Exhaust HeaderMaterial: Stainless SteelSurface: Mirror PolishModel:EH28273 Exhaust Header VS Manifold, which is the better choice? The structural differences between exhaust headers and manifolds are the material and size. From the material, exhaust headers are made of lighter, thinner steel, while exhaust manifolds are made of thick iron. Exhaust headers are also longer than exhaust manifolds. When in use, exhaust manifolds create back pressure, which lowers performance. Because each cylinder of the engine is given its own tube, however, headers eliminate this problem; thus, allowing the gases to exit without the creation of back pressure. Therefore, exhaust headers are a BETTER choice than an exhaust manifold.

No comments to show.

No archives to show. 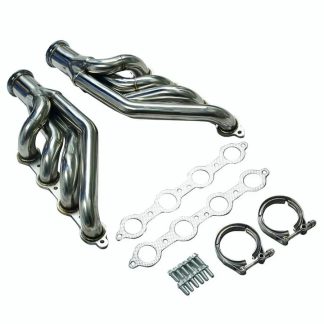